Hey Folks! I have someone really awesome I want you to meet..

I'm really excited about signing with Shannon for so many reasons. Her amazing background is one—and her excitement over my writing is another. Shannon is building her list, so...'nuff said. Work on your craft, be true to yourself, be awesome and Shannon may be interested in hearing from you.

So here is Shannon in her own words...

What are your favorite books to read?

I have pretty eclectic taste and enjoy reading a range of fiction, including women’s, young adult, literary, and historical, as well as narrative nonfiction.  A few books that I enjoyed this summer outside of work included The Other Typist by Suzanne Rindell, Pushing the Limits by Katie McGarry, On Writing by Stephen King, and Swamplandia!  by Karen Russell.

What were some of your favorite books growing up?

I remember when I was about eight my mother came home from a business trip with a gift: the The Witch of Blackbird Pond by Elizabeth Speare.  It was my first experience falling under the spell of a novel and its characters, and I didn’t leave my room for two days!  When I turned that last page, I was officially in love with reading, and would be for life.

What is your publishing background and what was it that led you to become an agent?

I have worked in publishing and law for more than a decade.  Having served as both an acquisitions editor and a corporate/ licensing attorney in New York, being an agent was a natural progression and a great combination of my skills and passion.  I am so pleased to have joined Marsal Lyon and couldn’t be happier with the agency and its approach to helping writers achieve their publishing goals.

What kind of work are you looking for these days?

I represent authors of literary and commercial fiction, young adult fiction, and select nonfiction.  With respect to fiction: I am drawn to fresh voices, compelling characters, and crisp prose.  Lisa Amowitz, author of Breaking Glass (and one of my newest authors!), is a great example of the kind of writer that draws me in.

For nonfiction: I am interested in memoirists with exceptional stories to tell, as well as authors with a strong platform in current affairs, history, education, or law.

What words of advice do you have for up and coming authors?

It has been said before, but one piece of advice I like to give is to authors is: READ!!.  Read books in your genre to help you gain an understanding of your target audience.  And then read books outside your genre to expand your worldview and keep your writing fresh.

Thanks for stopping by, Shannon! I'm looking forward to a fruitful and fun partnership with you. If you'd like to find out more about Shannon and her agency Marsal-Lyon, visit her at:

Good morning! I know this blog has been gathering dust of late, but here's a little something to perk it up. Over the summer I had the pleasure of working with Barry Lyga, the author of I HUNT KILLERS. Barry hired me to do a cover for his adult ebook, UNSOUL'D. To mark the occasion, I asked Barry a few questions about himself and our design process for the cover.

But first, here is the cover, which I am very pleased with (note: please remember that this is not a young adult book, it's for intended for adults 18 and up): 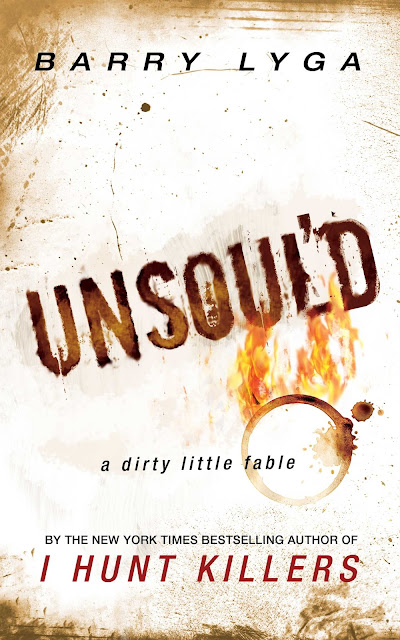 Here's the blurb from GOODREADS. You can also download a sample of the book to start reading.

Then, one quiet morning, he meets the devil while pounding away at his laptop at his usual coffee shop. Soon, a deal is made, a contract is signed, and Randall is on his way to fame and fortune unlike any he ever imagined.


What follows is a bawdy, hilarious, yet harrowing tale of one man, one devil, and a deal that could change the world.

Now for the interview! Welcome, Barry!

You are best known for your NYT bestselling hit, the young adult thriller, I HUNT KILLERS. Tell us about your books that are perhaps less well known.

What in your life inspired you to write the dark and edgy tales you are famous for?

As your cover designer, I can happily say that it was a lot of fun working with you on this cover. Can you give a brief rundown of how we arrived at your vision for the cover?