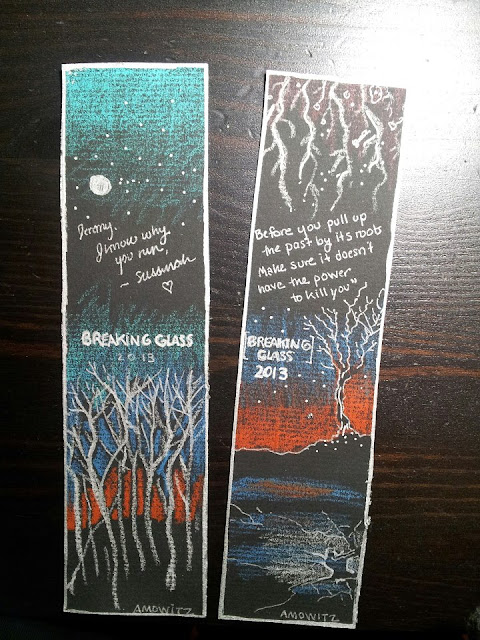 I hope you'll come and check it out.

In honor of the year ahead, I gave my blog a makeover. What do you think? I'm trying to unify my *brand* as they call it.

2012 was a strange year spent it with the vague (and ultimately non-existent) threat of a Mayan apocalypse. Instead some truly apocalyptic things happened--the Japanese tsunami, multiple mass shootings--including the Sandy Hook horror, and of course, not to be outdone Hurricane Sandy. That hurricane still has the northeast reeling from the damage, though we here in the Bronx were mostly unscathed.

My parents' health was shaky all year, finally, thank goodness, stabilizing. Then of course we had to endure the slow torture of the election from hell. And now, the lovely fiscal cliff, which as of this posting, we may or may not be heading over in a barrel.

Yet, for me, 2012 was an amazing year. In February Spencer Hill Press bought my book BREAKING GLASS, and bought VISION and a sequel in October. I have been given the opportunity to do some  cover design work for both SHP and indie authors. The Spencer Hill family is an incredible addition to my life. I've met a group of wonderful authors, and of course, my invincible editor, Vikki Ciaffone.

For me, writing and cover design are a waltz with two lovers. They both fulfill me to my core. So who can ask for more?

I face 2013 with a little bit of fear, a little bit of exhilaration. This spring both my kids face new milestones--my son graduates college (hopefully) and my daughter, high school. My book releases in July.

I will be doing a lot of cool BREAKING GLASS related stuff, including some giveaways. And, my awesome super prolific Hamster twin (because we are both hyper enough to power the northeast with our hamster wheels) Michelle McLean and I (along with 21 others) will soon be rolling out a brand new blog for 2013 releases called Scene 13--so stay tuned for that.

May all your wishes come true.

Some thoughts on a tragedy from a friend

I've been posting my thoughts about this past week's horrific event, here and there and helter skelter. Today I received an articulate and heartfelt email from an old friend, Stephen Crooks, and I wanted to share it here...

Remember the last time you took a bad fall, cut yourself in the toolroom, or rapped your headbone in some big, stupid way? Maybe in a ball-field or a car accident or somesuch? The impetus is to be very still, right? Breath coming slow and shallow, feeling around for lingering damage or dizziness, assessing the situation.

This horrid week has been so much like that, a damaging, lacerating blow to the nation's midsection, causing us to stop, hold our breath and examine the way we feel about ourselves and each other. To assess the situation. At this time of thoughtful sorrow and of sorrowful thought, I imagine that people should be entitled to their own space, to work it all out for themselves; each in their own way and time. People are hearing so much talk. I think, "Who needs me running off at the mouth?"

But there I was a day or so ago, listening to the President, declaring with grim determination that assault rifles and handguns a 'threat to national security', committing his energies to going 'door to door and getting the guns'.

President Obama's tearful broadcast? Unfortunately, no. The face and voice was that of fictional President Andrew Shephard, movingly portrayed by the actor Michael Douglas in a movie made nearly twenty years ago. Draw your own conclusions.

Look, I understand what some people are saying, how we should refrain from 'politicizing' this fathomless horror in Newtown, this senseless loss of innocence and future and human promise, this waterfall of tears. That we should put aside current events and just pray, for both the victims and the survivors.

Of course we should. For all of about twenty silent seconds.

Then, immediately, before our national shock can wear off to be replaced with the next callous holiday-season headline, we should consider a nation where budget trimming would allow the desperate and the mentally ill to fall between the cracks of care until it's too late, that allows the senseless proliferation of deadly weapons to go unchecked, that still believes uniforms and badges and fear of punishment will keep bad people from doing bad things. Godalmighty, I love and respect our policemen, but do even they believe that anymore?

We yearn to punish the guilty but can't, because the terrible demons that drove this unstable young Connecticut man have already punished him to death. What's left to us in this moment, without shame or hesitation, is to become a nation of mourners, praying for the souls of the departed, praying for the safety of our own children, praying for our nation. And praying for peace of heart and clarity of thought.

Because in the next moment, driven as always to either our worst or our best instincts, we can become a nation of rage, or of mercy; of blind punishers or of clear-eyed problem-solvers. A nation of grieving hindsight, or of creative humanistic forethought.

Perhaps it's the primitive bloodlust of human nature to look for the nearest rope and tree at a time like this; to curl our lips around gutsy epithets like 'I hope this so-and-so rots in Hell,' (despite the fact that this in the season of Jesus and Mary and 'Mercy mild'). But it doesn't take guts to punish a sick pathetic man any more than it takes guts to shoot a mad dog, does it?

You want to show guts? Puff up your collective chests, curl those lips and talk tough to your elected representatives; tell them to keep us safe from the prevalence of deadly weapons in the midst of our families and communities. Talk tough to those who think that the way to 'fiscal responsibility' is by denying care to those teetering on the hard edges of our society who need it. Show some real guts.

Whenever there is a tragic loss of life we are staggered and diminished, behaving as if there are much, much less people left on the Earth; a veritable hole in the population, causing the world itself to wobble on its axis for the lesser weight of human souls. Although of course this cannot be the case.

But I say we can behave as if it is; we can take what we have left, all the few billion souls remaining, bind them with our arms and hold them close to our hearts and never, ever let them stray from our loving attention.

It's challenging to think this way, and that's reason enough alone to do so: to consider those lost terrorized schoolchildren just as we consider the lost terrorized young man who slew them, their teachers and protectors, his own family. The murderer and the murdered, all of them created equally perfect and full of promise as you or me or any newborn child in a manger in Bethlehem, a nursery in Waukegan or a doorstep in South Philadelphia, but gone from our care, concern and community, from our binding arms, far too soon.

What do we owe them? Them and all of the beloved lost children of our lives? Ever in our thoughts, our words, our deeds, our philosophies and politics and religions and societies; we owe them our best. Our best, whatever meaning that word has for you. Through all of the new opportunities of this coming new year, stacked high and gleaming before us like unopened gifts, will we honor them by rising to it?
Posted by Unknown at 3:39 PM 1 comment: