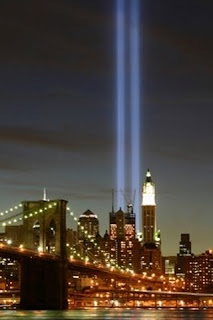 I'm a New Yorker and I'm not finding all of the recollections and talk of 9-11 easy. But somehow, reading other people's memories of the day is oddly comforting.

So here is mine:

That morning I was in a great mood. It was nice and early--8:30 AM and I was well ahead of schedule. We'd recently rolled out a few brand new courses at the college where I teach, and I'd finally started to feel I had things under control.

I paused before getting into my car and stared up into that implacably cloudless blue sky thinking I'd never seen a nicer morning in New York City. Yet, while driving to work, though the day was glorious, a vague sense of dread took hold of me, the same sense I'd had pretty much since 1999—that something bad was going to happen. I hadn't felt it for awhile though, especially after a summer where the biggest news was a series of shark attacks.

But that morning, the vague sense was back.

As I was about to turn from Sedgewick Avenue onto Hall of Fame Terrace, I heard Claudia Marshall's soothing voice on my favorite radio station, WFUV, announce rather calmly that a plane had crashed into one of the towers of the World Trade Center. At first, I assumed it was an accident, and envisioned a small plane hitting the building like a bug on a windshield. But the knot in my stomach clenched tighter.

I pulled onto campus and into a parking spot right in front of my building and sat listening to the car radio as an eyewitness who worked in the Empire State Building recounted how he'd watched a jumbo jet swoop down and fly straight into one of the towers. I was paralyzed with fear and knew this was no accident. I got out of the car, just as our office manager, Sharon, was coming to work and told her what I'd heard.

In my office, I sat, shuffling papers around. At the time I didn't have an internet connection in my office and was cut off from the news. A few minutes later, Sharon came in to tell me a second plane had hit Tower 2. That's when we hugged and started to cry.

We, along with the only other person on the floor, Cesar, our lab tech, tried to get the news on TV. It was hard then, as there wasn't much in the way of broadband and our TV reception stank. But there it was, that horrible image of the burning towers.

Meanwhile, I had a class to teach. And so I went. About half of my class managed to make it, most of them having no idea what had transpired. Again, with the poor internet of the day, and with cell phone and internet finally petering out, it was hard to get information. But, one of my students had a husband who was a police officer. It was she, Rosa Cordero, who informed us that the first tower had collapsed.

It was a small group that had wandered in that morning, maybe about nine students. We were in a state of raw shock. For lack of knowing what else to do, we gathered in a circle, held hands and prayed. A few minutes later a car with a bullhorn demanded that we evacuate the campus immediately. Without delay, we left. With no cell service, I could not reach my husband, who worked two blocks from Ground Zero and who often got a bagel in a bakery in the train station under the WTC. That morning, I wasn't sure what route he had taken to work and I couldn't reach him.

It took me nearly an hour to drive the ten minutes from the college to my kid's school, where my daughter was in Kindergarten and my son in fifth grade, since all the bridges to Manhattan had been blocked and the traffic in a normally quiet area was insane.

When I got to the school, all was chaos. I picked up my daughter and a few of her friends, because their parents were stuck downtown. My friend, who was home recovering surgery, had picked up our sons and another boy. Somehow, I ended up with seven kids in my house, fielding calls from their panicked parents.

The thing I remember most clearly was my son, Ben, sitting next to me on the bed in my bedroom. He was three months past his tenth birthday and he recalled that birthday very clearly, because on that day, June 19, 2001, the four of us had on a whim gone to the observation deck of the World Trade Towers for the very first time and watched the sun set. While we were there a jet flew low over the Hudson River and my son was alarmed.

"That plane can fly right into the building!" he said, fearfully.

"That will never happen, honey. Planes fly here all the time."

So when he faced me and said, "You lied, Mommy," I knew exactly what he meant. And what was I to tell him? What on earth were any of us supposed to tell our children from that moment on?

In that moment, I knew our world had changed forever. Safety was an illusion and we were all going to have to find a way to live with the knowledge that a day that could begin with a clear blue sky could end in horror.

This is the world my kids have grown up in. This is why I started to write, and why, I realized that nothing is too frightening or horrifying to share with a child. That you have to live in the moment, in the now, and take each day as the gift that it is.

Eventually, that afternoon, my husband called. He had decided to bike to work that day, since it was so beautiful, when he was originally going to take the train. On his ride on the bike path that follows the West Side Highway, he heard crazy sirens and care radios blaring with news he couldn't figure out. Something awful had happened. He found out as he got to a spot on the bike path with a clear view of the towers, just in time to witness the first tower collapse.

It took us all, my family, my students, every one I know, a long, long time to heal--to become ourselves again. For weeks that smell lingered in the air--the awful smell of burning fuel and death, a smell I hope I never smell again because I will most certainly cry.

For the rest of the semester, the students at my college were like automatons, diligent robots who went about their work mechanically. All of us were filled with unspoken outrage, that we should be attacked, that such a perfect day should be marred with such hate. Our days were filled with mentions of the dead and the missing--people we knew were lost and never coming home again.

One of my students was an ex-marine on National Guard duty who got called to Ground Zero to rescue people and recover bodies. He returned to class two weeks later, tightly wound and bristling with restless and chaotic energy. After an nearly violent outburst in class, I advised him to get help from the VA--which he reluctantly did—eventually finishing the class quite admirably. To me that brave student, Leo Rosado, will forever represent the bravery that all of us here in New York needed to get up every morning and face our frightening new world--to have hope again in the future.

And to heal that semester, we did the thing we do best--art. The art department created a 9-11 memorial exhibition and all my classes 9-11 projects to help us deal with the event.

But we got through--and that New York--the one that pulled itself together, the New York that came out onto the streets of my neighborhood that night to sing the national anthem and just hold hands and be together is the New York I will never forget. Because we learned just how strong we are.

In the years that followed many good things happened in my life. My son, then 10, who after facing his own academic and emotional struggles, is now 20, and a junior at a great college. My daughter is a beautiful and spirited teen, nearly 16. She doesn't remember much about that day. I turned to writing and art to heal, and it worked.

It's sad, though, to think of how divided this country has become in the years since. But this city, my city is not. We stood together and thrived in this past decade despite the economic downturn and political upheavals that have rocked this country--despite everything. We put aside our petty differences. We learned that in the face of adversity, you can prevail, that life is too short to bicker over differences in color, or gender preferences. It's a lesson I have taken to heart in just about every aspect of my life. No amount of fear will ever squelch our spirit here in New York.

As a footnote, I'd like to mention that in 2002, I entered a web-design contest sponsored by my employer, The City University of New York--and to my surprise, won. The website I designed is still up and running and featured today on the homepage of cuny.edu

It was a healing experience to create that website and I am forever grateful for the opportunity it gave me to express my grief and emotions from that day.

If any of you blog followers (if I have any left after being too negligent) want to share your memories, please do.
Posted by Unknown at 12:56 AM 3 comments: